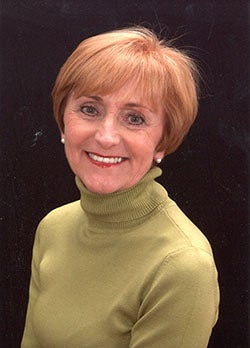 Not many people can say that they are an expert in a field without it being backed up by proof.

Expertscape placed Burke in the top 1% of scholars writing about obesity over the past 10 years making her an “Expert.”

“I thought that’s nice,” she said. “I know I’ve published a lot of papers, but I know there are so many big-time researchers who have been doing this for decades and they have tons of publications, so I was shocked that I could be in the top 1%.”

Burke said her interest in adherence to treatment was sparked in California while working extensively with patients on improving their health.

“Take the medication, change their diet, exercise,” she said. “It was very challenging. Patients sincerely tried but they didn’t know how, and I realized I was in over my head. I really needed to learn more about how people can change their behavior.”

She said she wanted to do research and realized she needed to go back to school to get her PhD.

“The expert in the country for adherence to treatment regiments was Jacqueline Dubar-Jacob, our dean,” she said. “I interviewed at several schools for doctoral programs and even though it was a very cold, dreary day in January when I visited (the University of Pittsburgh’s School of Nursing) I still came from California so I could study with her.”

“Lora has been invested in solving the obesity problem since she was a graduate student,” said Jacqueline Dunbar-Jacob, PhD, RN, FAAN, Dean and Distinguished Service Professor of Nursing. “She is an outstanding investigator who works successfully in an interdisciplinary realm and is an outstanding mentor to graduate students from multiple disciplines.  I can’t say enough positive things about her.”

Burke said through her doctoral program dissertation she worked with study participants testing an intervention to lower their elevated cholesterol levels by changing their diet. It’s when the Chair of Epidemiology (Dr. Lew Kuller) told her she’d have to incorporate medication adherence into her research if she wanted to continue to study individuals with hyperlipidemia, she said, she wasn’t interested.

“I was not interested in focusing on medications,” she said. “I have always been interested in changing people’s lifestyles as way to improve their health.”

Burke applied to the cardiovascular behavioral medicine post-doctoral program in psychology. It’s there her work in obesity began under the mentorship of Dr. Rena Wing.

“Back then, I didn’t even realize obesity was a disease,” she said. “A paper was published in 1997 in the New England Journal of Medicine talking about how obesity was not a cosmetic issue, not a willpower issue. It was a disease.”

Burke said she became very involved and started clinical trials to test behavioral approaches to support people to change their lifestyle behaviors so they could lose weight.

SELF-MONITORING: THE CENTERPIECE OF HER RESEARCH

Burke’s first clinical trial involved testing various diet approaches to weight loss on four groups of people. The groups were told to record what they ate and their exercise regimens.

“A participant in my study would always say to me, ‘I know I’m doing better because I’ve been self-monitoring,’” she said. “I thought, ‘we need to look into this because participants keep telling me that they recognize what works is self-monitoring.” This was good anecdotal evidence.

Burke said her clinical trial was the first to document how and when people self-monitor their dietary intake. It became the centerpiece of her research.

A breakthrough in studying self-monitoring came when she obtained a supplemental NIH grant that funded her to use very innovative instrumented paper diaries that documented when study participants actually self-monitored, providing the evidence that there was a significant association between when individuals self-monitored their food intake and weight loss outcomes. “Some people were really super religious and compliant and just filled in everything every day, and then there were other participants who never opened the diary for an entire week, but it was filled in completely.” she said. “They would fill it out an hour before the session for the entire week, and unfortunately, they didn’t benefit. The study showed that the people who truly self-monitor and did it in real time, very close to when they were eating would do significantly better than those who did not.”

In 2005, she was awarded another grant to study how people self-monitor using a paper diary versus an electronic diary. It also looked at one group who received feedback to their self-monitoring practices. Most recently, she wrapped up a large clinical trial involving 502 adults split into two groups: both did the same work of self-monitoring diet, physical activity, and weight for 12 months, but only one group received remotely delivered feedback messages up to three times/day.

“We also wanted to examine if the group that did not receive feedback, who represented the thousands of people who are downloading diet apps, buying the FitBits and smart scales, if this self-directed  approach actually worked?” The answer: yes. As long the person is self-directed and stays engaged with the use of the digital tools.

Through this 2-group trial we are providing the evidence that all the apps and smart digital devices out there really do work, but the person has to use them long enough to see a benefit, to be engaged with them for the long-term. This is the biggest challenge we face today with the array of digital self-monitoring tools – staying engaged with the devices so one can monitor their behavior and make changes as needed. There is a large body of evidence supportive of self-monitoring as the core of behavioral treatment for weight loss and that self-monitoring of diet is consistently related to weight loss outcomes. We know that self-monitoring works, and we have tools today that make it less burdensome but still we need to develop better strategies to support individuals’ sustained use of the tools.

All this work led to Burke being named an expert in her field. While she said receiving the title was shocking, it also wasn’t surprising.

“I’m reading papers now and preparing manuscripts to report on our latest trial findings and I see how often the work of my team is cited in those papers,” she said. “It makes me feel wonderful. Maybe once or twice, or six or eight papers. That is just so cool.”

Even her students’ papers are being cited long after they have graduated. “That’s a really gratifying thing,” she said. “That’s a confirmation that what I’m doing is impacting the field and other people are learning what I am doing and they’re trying to improve on what I’m doing.”

It’s not a competition, she added, because the end-goal is the same: improving people’s health.

She wants to add a sleep intervention into the grant she works on next, while continuing to mentor the next generation.

And the education she received at the University of Pittsburgh’s School of Nursing, she said, was everything.

“I would say that Pitt gave me a fabulous background, from theory to research methods to obtaining extramural grant funding, both in the SON, in GSPH in the epidemiology program and the behavioral medicine postdoc,” she said. “I have been able to be mentored by and to collaborate with some of the giants in their fields.”  “After I completed my postdoctoral fellowship, I looked at many other schools to interview, but I just felt like Pitt had a strong behavioral research presence and a tremendous collaborative atmosphere that a lot of other schools don’t have. So, I am still here.”