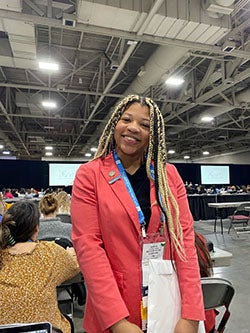 For the first time in Pitt Nursing history, a student has been elected to the National Student Nurses’ Association Board of Directors.

“It’s super exciting,” said Azariah Torain, who just wrapped up her sophomore year at Pitt Nursing. “I wasn’t expecting to win, so to have it happen was really cool.”

Torain said she decided to run for a seat on the board of directors ‘on a whim’ after she noticed the position was vacant. In April, she was elected as the Imprint Editor at the 70th annual NSNA Convention in Salt Lake City.

“As an imprint editor, it will be my job to go through story ideas that people send in and make selections for our magazine,” she said. “I will also come up with themes for the magazine.”

Torain will also be the head of the Image of Nursing Committee. The goal of the committee, established in 1993, is to dispel any misconceptions the public may have about nursing through education. It’s also an educational tool for students to help them maintain a positive image of nursing.

“It’s about pushing the idea that professional identity in nursing is important and pushing for people to join professional organizations,” she said.

Torain joined Pitt’s NSA chapter in her first year at nursing school but became a more active member during her sophomore year. She said the other NSA members and her advisors, including Pitt Nursing faculty members Jamie Zelanzy, PhD, MPH, RN and Susan Wesmiller, PhD, RN, FAAN have been extremely supportive and were thrilled when she was elected to the board.

“They were all super excited for me,” she said. “I’ve had a lot of people congratulate me so that’s been nice.”

Torain said she plans to go into nursing leadership and her new role in the NSNA will help prepare her for the future.

“I definitely feel that being able to be talk to people who are doing big things in nursing on a regular basis will be beneficial,” she said. “And just being exposed to different leadership styles of everyone else who is on the board and being able to grow my leadership skills will help me be more confident in the future.”

Torain said her time on the NSNA board will be a combination of both in-person and virtual events. She’ll be traveling to NYC for a week in mid-May to take part in NSNA board meetings. She’ll also be heading to Virginia Beach for a mid-year conference and to Nashville in 2023 for the NSNA National Convention.