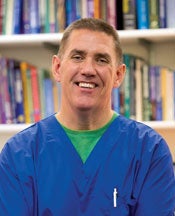 In the early 2000s, when medical equipment manufacturer Laerdal Medical had cutting-edge medical training products in the pipeline, John O’Donnell, DrPH, CRNA, professor and chair of the Department of Nurse Anesthesia, struck a deal. He had a faculty development grant in simulation, and he wanted to use it to acquire a SimMan for training his students. SimMan is a computer- controlled mannequin. It is very life- like—it breathes, has a heart rhythm, bleeds, and talks, for starters. It was so early in production that Laerdal hadn’t even determined the final cost of SimMan. O’Donnell approached the company, saying, “Here’s the deal. I have this money, and if it costs less than this, then you’ve made a profit. And if it costs more … ” Laerdal agreed. “We received the very first simulator to come off the assembly line in the United States,” O’Donnell says. As to who got the better end of the deal, O’Donnell is keeping mum.

O’Donnell got involved with simulation on the ground floor back in 1994 in the early days of Pitt’s Peter M. Winter Institute for Simulation, Education, and Research (WISER). Now WISER’s director of research and associate director for nursing programs, O’Donnell is known internationally for his expertise in simulation educational methods and more specifically for his work in debriefing after simulation events.

For students in the nurse anesthesia program, this means that they get to train in one of the world’s preeminent simulation facilities. Before a beginning student walks into the simulation lab, he or she has already been prepped with 30 hours of classroom explanation. Then he or she spends about 40 hours in the simulation lab learning and practicing skills from how to intubate to how to check the anesthesia gas machine, read the miniature printout, and position a patient on the operating room table. All of these individual skills are mastered before a student is brought in for a simulated operating room experience.

O’Donnell’s teaching has received attention both locally and nationally. He is especially proud of the Chancellor’s Distinguished Teaching Award he received in 2011. Also special to him are the 2006 national Program Director of the Year award from the American Association of Nurse Anesthetists and a 2010 University of Pittsburgh School of Nursing Cameos of Caring® award. He’s also quick to point out that the school’s nurse anesthesia program is ranked first in the country by U.S. News & World Report. “I think we’re one of the top anesthesia programs in the country,” he says. “We produce nurse anesthetists who can work in any setting directly out of school with almost no orientation.”

And that’s something that can’t be simulated.