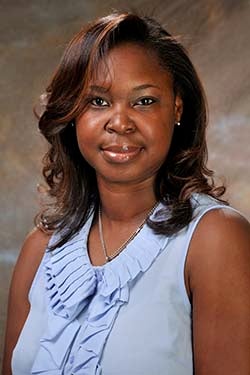 Maya Clark-Cutaia is an assistant professor of Nursing at the New York University Rory Meyers College of Nursing.  She received her BSN and MSN from the University of Pennsylvania, and her PhD from the University of Pittsburgh. Clark-Cutaia’s predoctoral training was initially supported by a T32 predoctoral fellowship and then by an individual NRSA F31 predoctoral fellowship entitled for her research on dietary modification management in end stage renal disease sufferers on hemodialysis.

After completing her PhD, she returned to the University of Pennsylvania School of Nursing for a T32 postdoctoral fellowship. This fellowship culminated in Clark-Cutaia’s receipt of a K23 Mentored Patient-Oriented Research Career Development Award Recipient from the National Institute of Nursing Research to develop her program of research in symptom science, with an emphasis on hemodialysis patient symptoms related to dietary sodium intake.

Clark-Cutaia’s scholarship focuses on the increased morbidity and mortality risk that results from end-stage renal disease and hemodialysis renal replacement therapy. Clark-Cutaia’s long-term goal is to impact end-stage renal disease sufferer quality of life by decreasing symptom burden and hospital visitation. She received a K23 Mentored Patient-Oriented Research Career Development Award Recipient from the National Institute of Nursing Research to build her program of research in symptom science, to determine the effects of carefully monitored levels of sodium intake as set forth by the National Kidney Foundation, Dietary Guidelines for Americans 2010, and AHA on symptoms and signs in end-stage renal disease patients undergoing hemodialysis. While these recommendations are universally accepted and prescribed to patients, little to no empiric evidence exists demonstrated the beneficence of said restriction recommendations. Clark-Cutaia’s randomized controlled trial was the first of its kind, to her and her research team’s knowledge, and she is actively publishing these data to better inform clinical practice and her next scientific inquiry.

Clark-Cutaia continues to practice as a nurse practitioner in the fields of Urology, General Surgery, and Otorhinolaryngology. She served in the United States Air Force Reserve in an aeromedical evacuation squadron as a flight nurse and in an aerospace medicine squadron in a public health nurse capacity. She is president of the Xi Chapter of Sigma Theta Tau and the University of Pennsylvania School of Nursing Alumni Board. She was recognized with the “Under 40 Award” by the National Black Nurses Association. Clark-Cutaia has received a one-year, $30,000 pilot award from the Center for Improving Care Delivery for the Aging (CICADA) to study self-assessment among patients with kidney disease who are receiving dialysis.  She was selected as one of ten Multiple Chronic Conditions Scholars, a program spearheaded by the NIH-funded Health Care Systems Research Network and Older Americans Independence Centers AGING Initiative.