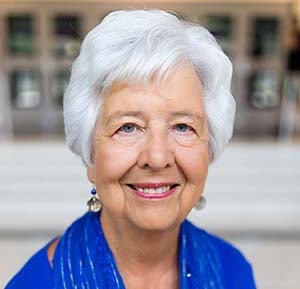 Sandra Sulsberger Bowles graduated with a Baccalaureate of Science in Nursing in 1961 from the University of Pittsburgh School of Nursing.  She worked with the Visiting Nurse Association of Allegheny County until returning to the University of Pittsburgh to earn a master’s degree.   In 1963, she was inducted into Eta Chapter of Sigma Theta Tau International. Upon completion of the MNEd, she relocated to Charleston, West Virginia, where, after working one semester at Charleston General Hospital School of Nursing, she was instrumental in opening an associate degree program in nursing at Morris Harvey College, now the University of Charleston. She has remained at this institution since 1964 leaving only to complete a Doctorate in Higher Education Administration at Vanderbilt University.  On July 31, 2020, Bowles will be retiring after having served Morris Harvey/The University of Charleston for 52 years, the longest serving faculty member at this institution.

Over her tenure at MHC/UC she served as chair of the Department of Nursing and Dean of Health Sciences, overseeing health science programs in respiratory therapy, radiologic technology, medical technology and sports medicine—programs that have produced more than 5,000 graduates to serve the region. She completed a term as University Provost prior to retiring from health sciences and moving to the School of Pharmacy, where she has served 12 years as Assistant Dean for Assessment and Special Projects.

Bowles has been very involved in accreditation and assessment throughout the years. With the graduation of the first class from the MHC program in 1966, the program was accredited by the National League for Nursing, at that time the only accrediting agency for nursing. In 1968, she became an accreditation site visitor for the NLN and served in many capacities for that organization, including chairperson of the Council of Associate Degree Programs and member of the NLN Board of Governors in 1995-1997. Bowles currently serves as an elected Commissioner to the NLN Commission for Nursing Education Accreditation (NLN CNEA). She has made many presentations on assessment and accreditation at regional and national meetings and coordinated three workshops on accreditation at her local campus. She served two terms on the West Virginia Board of Examiners for Registered Nurses.

In 1991, Bowles became a consultant-evaluator for the Higher Learning Commission of the North Central Association (HLC) and for nearly 30 years has served that organization in many ways. Bowles has served as a peer reviewer, member of the Eligibility Committee, on accreditation review panels, and currently, as a member of the Institutional Actions Council (IAC) the group that makes accreditation decisions for colleges and universities within the HLC Region.

She has served as a consultant to many nursing and higher education programs, providing assistance with assessment and achievement of accreditation. In 2008, she earned her first Certified Nurse Education (CNE) through the National League for Nursing, a certification she still holds today.  In 2005, Bowles was recognized as the Professional Woman of the Year by the West Virginia Women’s Commission.